The 25th year of the Junior Grand Prix series kicked off once again in Courchevel, France, where skaters from twenty-nine countries competed during the three-day event.

Courchevel is a ski resort in the French Alps, meaning it’s at high altitude and the air is thinner. This can negatively affect a skater’s stamina throughout the programs and make it harder to recover from falls.

Japan dominated the competition, earning two medals in both the men’s and women’s event.

Hana Yoshida, Ayumi Shibayama, Shunsuke Nakamura and Ryoga Morimoto all made their Junior Grand Prix debuts this past week and set up great chances to qualify for the Finals in December. Yoshida, who ratified her triple axel last season, attempted it in the free program but had to step out on the landing. Nakamura was the only man to attempt a quad in the event but ended up falling.

“We would like to make it to the [Junior] Grand Prix Final, so we would have to do pretty well at our next Grand Prix but I think within a month and a half we’ll be able to show an even better performance and at Worlds we’d like to reach the podium.”

In the men’s event the solo entry of Younghyun Cha finally landed on the podium in second place, after competing at Junior Grand Prix events since 2017. Yujae Kim and Seojin Youn finished third and ninth respectively, both making their debuts on the circuit. Kim also attempted a triple axel but it was marked with a Q in review.

Elsewhere in the competition, Noah Bodenstein (Switzerland) made his return to the JGP circuit with two personal best performances to finish five points shy of third place. Nella Pelkonen (Finland) finished in fourth after the short program in prime position to climb up, but two falls and a popped jump in the her free skate meant she finished ninth in the free and seventh overall. Both of these skaters impressed us, and so many fans, with their musicality and make them a skater to watch out for at future competitions.

France had the maximum amount of skaters at the competition (3 in each discipline) and medaled in the ice dance event. Celina Fradji / Jean-Hans Fourneaux are seasoned skaters in the JGP circuit and after finishing in fifth place at last year’s Courchevel event, won the silver medal this year.

*Note: Sophia Bushell/ Alex Lapsky’s free dance has been cut out of the full free dance stream and not been uploaded individually due to Bushell having a costume malfunction. 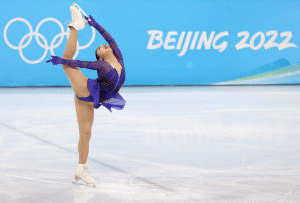 The third individual event of the Olympics is the Women’s event and we’re going to break down our predictions for it. This competition has been tainted by a doping scandal and the choice to let Kamila Valieva compete, so this is gonna be a rough one to talk about. Embed 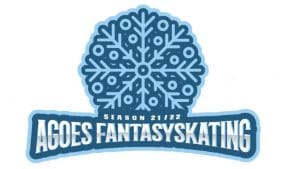 JOIN HERE Thank you so much for the overwhelming response so far! We are so exciting to bring this game back and, hopefully, to play a full season this time.  If you have any questions, you can find us on these Social Media Platforms or send us an email (admin[@]anythinggoe.com)