From a new junior record to the series’ first quad jumps being landed, Ostrava hosted a great competition where fans were introduced to even more future stars.

The Ice Dance event in Ostrava was one of many firsts.

Kateřina Mrázková / Daniel Mrázek (Czech Republic) not only won in their home nation but broke the junior world record for highest rhythm dance score set back in 2019 and they became the first Czech ice dance team to win gold at a Junior Grand Prix. Also finishing on the podium was Phebe Bekker / James Hernandez (Great Britain) and Nao Kida / Masaya Morita (Japan), who won the first ice dance JGP medals for their countries.

“In 2018 I was here in the same Junior Grand Prix as a singles skater and I finished in fifteenth in the standings. Today I’m here with my sister, my partner, and we are achieving something I didn’t believe before four years.”

Japan had a fantastic competition earning four out of six possible medals. A turn out on the landing of the triple loop in the short program put Nozomu Yoshioka in second place heading into the free, but with two clean quad toes including one in combination, he secured the win by five points. In the women’s event Mao Shimada won the event by just over 23 points with the only error across both programs being a fall on the quad toe-loop attempt. However, she also became the 21st woman to land a clean triple axel in international competition.

Ikura Kushida made the climb up from eighth place in the short to finish in third overall. Haruna Murakami / Sumitada Moriguchi made their international debut to place fourth overall. A fall in the short program saw them in fifth heading into the free but a much better short, including a jumping sequence that now holds the record for highest base value in a pairs event, had them third in the free. However due to the new age rules, this season is the duo’s only eligible international outing as Juniors.

Also in the men’s event, Nikolaj Memola (Italy) rose from fourth after the short to place second overall and podium in his fifth JGP event. Andreas Nordebäck (Sweden) finished in third place. An invalid spin in his short program put him in third going into the free, he was able to hold onto the position despite Memola’s better free skate. Minkyu Seo (South Korea) led after the short program with a fantastic skate but unfortunately had a fall in the free skate, and edge calls against his lutz jumps led him to fall to fourth place.

In the women’s event, 13-year old Minsol Kwon (South Korea) made her debut with two great programs, the only marked error being an edge warning on a triple lutz in the free. Mia Kalin (USA) was third after the short, and became the first woman to land quads on the JGP this season. Unfortunately, they were followed by falls on the next two jumps and Kalin finished the event in fourth place.

Sophia Baram / Daniel Tioumentsev (USA) made their international debut and won the event by over 30 points. Their opening triple twist was massive and a lot of their other partner elements worked really well however, like Murakami/Moriguchi, this is the duo’s only ISU-eligible Junior season due to the age rules. Cayla Smith / Andy Deng (USA) had a better short program than free, which included an invalid spin, a popped jump and a fall, but their second place short helped them earn that silver medal. Chloe Panetta / Kieran Thrasher (Canada) in their second JGP event earned the bronze medal. After two falls in the short program, they came back in the free with a much better showing and only one fall on a throw jump.

The second Fantasy Skating event of 2020 is over and we would like to thank all of you for participating! Below you will find the overall results for Cup of China 2020. Click here if you want to see how well you did in each discipline! Overall Cup of China 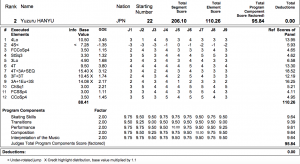 Reading a skating result protocol can be a daunting process. With so many abbreviated codes and numbers, it can be hard to grasp what the results actually mean.This is a breakdown of the different aspects of a Men’s singles Free skate protocol.