Is the Women’s minimum Total Element Score requirement too high?

But let’s dive in with some actual analysis and facts!

In order to qualify for the World Championships skaters and teams must have surpassed a minimum Total Element Score requirement in both segments of their programs at an international competition in either the current season or the season prior.

From season to season, the ISU can adjust the minimum score threshold across different disciplines. Most famously the ISU changed the women’s minimums mid-season in 2019/20, causing many athletes who thought they had an almost guaranteed chance of appearing at Worlds to suddenly need to attend many more competitions (likely to their financial disadvantage as they are often “small fed” skaters) in order to try and achieve these new minimums. It seems obvious to say, but minimums should never be altered mid-season as you are fundamentally changing the plans a skater has to make, disrupting their training and mental health and overworking them on short notice which could give them a higher probability of injury.

Notably affected was Slovenia’s long-reigning champion Daša Grm, who originally had her minimums and lost them with the change, tirelessly going from competition to competition to try and earn the few points she was missing. She ultimately didn’t get the required scores and didn’t attend Worlds that season and struggled during the sparse competitive season of 2020/21 to achieve them until she was able to submit a video of a skate for consideration to the ISU, a one-time allowance due to how coronavirus affected the number of competitions held.

During the most recent off-season, the ISU raised minimum scores once again.

These changes can seem relatively innocuous at first glance if you don’t study the ISU Statistics page (like me – I’m a nerd), and most people were originally more perturbed with the raise for the Pairs minimums considering there is an incredibly depleted field of teams at the beginning of this new quad after the Olympic season. However, it’s the women who are once again suffering at the hands of the ISU.

In analysing all of the competitions that have taken place so far in the 2022/23 season (at the time of writing this Tallinn Trophy and NRW Trophy are the most recent), I determined how many competitors in each discipline have been able to reach the minimum technical threshold in each segment of competition.

We’ll begin with Ice Dance, in which almost 75% of teams this season have achieved Rhythm Dance minimums and more than 77% have achieved the Free Dance minimums. So a good three-quarters of competitive entries have resulted in surpassing the minimum element score. When looking at the best technical score list (which takes into account the best technical result for a team over the 2021/22 and 2022/23 seasons) just over 76% of teams have achieved the Worlds minimum threshold.

For the Pairs discipline, an interesting one to consider based on the smaller field and notable increase in minimums, almost 53% of teams are achieving the Short Program minimums, with a notable increase to just over 74% for the Free Skate. It’s worth thinking about how teams that don’t have their minimums will compete more often to try and achieve them and improve, and as there are a lot of new teams or teams who don’t have a lot of international experience competing this season, that these percentages may be lower than usual. The absence of Russian pairs teams whose country is currently banned from international competition is also likely to have lowered these figures. Via the best technical score list over 74% of teams have achieved their Worlds minimums.

When it comes to the Men’s discipline, just over 42% of men in competition this season have achieved the Short Program minimums, the percentage dips to just 35% for the Free Skate. Whilst this is a drop from the 53-77% numbers of the two previous disciplines there is a notable increase in competitors when you reach the Singles disciplines, so the minimum scores do have to be harder to achieve so the number of competitors who reach Worlds is not overwhelming. This is quite a solid proportion of the skating field, and according to the best technical scores list just over 40% of the field have achieved their minimums.

And now to the main topic of the analysis: the Women’s discipline. Only 17% of women who have competed internationally this season have reached the threshold of a minimum total element score for the Short Program of 32.00. This rises to just over 29% for the Free Skate. This means less than 1 in 5 women are reaching the minimum Short Program score this season, with many competitions having no women at all surpassing the number. Just over 26% of women on the best technical score list have their Worlds minimums. The percentages speak for themselves, even though the Women’s discipline has the most competitors, they are being given unfair constraints compared to other disciplines, particularly obvious when you compare their figures to the Men.

This then led to the path of seeing how many women were able to achieve the threshold of 32.00 in the Short Program without a triple+triple combination jump in their arsenal. The answer was 9. Most of those skaters are highly established Worlds competitors who popped a jump in their combo. 2 achieved a second half of the program bonus. 6 of the first jumps in the combo were a lutz, the other 3 were a flip – the two most valuable and considered most difficult jumps. All in all this means that only 2.2% of women who have competed this season have achieved the minimum score in the Short Program without a triple+triple. This puts so many women internationally at a severe technical disadvantage with an almost unachievable goal of reaching Worlds if they don’t have those jumps. The age raise from 15 to 17 is supposed to, as well as protecting the physical and mental health of minors, allow more longevity for the careers of adults in this sport, but these minimums are punishing a plethora of mature skaters who won’t be able to achieve the most complex technical content, even if they’re skating clean, beautiful programs. For example, British skater Natasha McKay, a 5-time Worlds competitor, lost her minimums in both the short and free with this off-season increase, and achieving the Short Program amount may well be impossible when her layout consists of a 3Lo+2T, 3S and the required 2A. She skated a clean short program at MK John Wilson Trophy, with all of her spins earning level 4s, and still only achieved a technical score of 29.64 – this is 2.36 points away from the minimum requirement.

Whilst the Free Skate increase is also stingy, it is understandable with the new rule that allows full value for jump sequences that this difference may not be so impossibly unattainable. However, it is not allowed for a skater to perform a jump sequence (most commonly used by skaters who struggle with the more difficult triple+triple combination) in the Short Program as the 2A must be a solo jump and can’t be repeated in combination.

In conclusion, the Women’s discipline is most definitely being negatively and disproportionately targeted by these increases more than any other discipline. Many accomplished skaters are being blocked from reaching the most important competition of the season through unattainable goals. This in turn makes it harder for skating to develop and grow in some countries, as appearing at the World Championships, especially from a nation where skating isn’t as popular, can garner more media attention and more sponsorships or financial backing for skaters and more opportunities for other skater’s from those countries.

The concept of a minimum Total Element Score is a necessary one to ensure the World Championships include the highest level of competition, but this particular increase has been far too drastic and may now be actively hindering development in the sport.

One Reply to “Is the Women’s minimum Total Element Score requirement too high?” 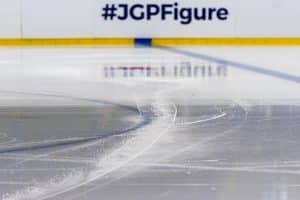 The fifth of the Junior Grand Prix events takes place in Ljubljana, Slovenia from the 22nd-25th September. There is no Pairs event at this Junior Grand Prix. Here’s a rundown of who you can expect to see competing at this event and some information about them. ©International Skating Union (ISU)

The sixth of the Junior Grand Prix events takes place in Zagreb, Croatia from the 25th-28th September. Here’s a rundown of who you can expect to see competing at this event and some information about them. Men * Junior debut Skater Country Notable Results 18/19 Nationals Program Information Notable Jumps